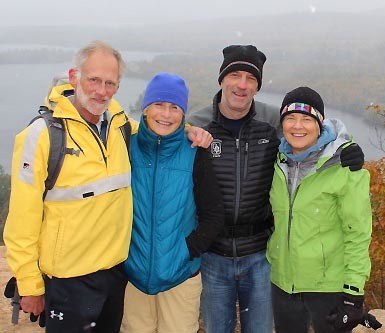 A snowy New Hampshire hike with friends last Saturday got me psyched for (in addition to a nap!) one of my favorite winter spectacles. Right about now, distant views in the landscape that were concealed by leaves start to be visible. Dark evenings that feel a little ghostly here in historic Concord have a magical flip side; the days become full of a bright, stark clarity with long, broad sight lines.
In this newsletter during this season of contrasts I’ve profiled clients with a project that expresses some magical contradictions and synergies. A wonderful Lincoln couple, Tim Christenfeld and Sara Cairns-Smith, helped nurture a plan that brought a stately old house back to its grand roots while it generated some creative new possibilities that weren’t immediately apparent.
Wishing you exciting new views of goodness and beauty!

For when you’re wondering, “Should I hire an architect?”
How many Metrowest Boston people are like this dynamic Lincoln couple, asking themselves: “Do we really need an architect for this project?” They had purchased a promising historic house, last updated in the ‘80s. Sarah, a consultant who traveled weekly, appreciated its Georgian style. Her husband Tim took care of their three children and could manage a renovation. They wanted to remodel their master bedroom and bath, provide a family library, and make some cosmetic updates.
Tim and Sarah had worked with an architect on another house, but since this project was so small and they were confident in Sarah’s design sense, they decided to call a good contractor. Walter Beebe-Center’s Essex Restoration team came up with a sketch that more or less followed the 1980’s space allocation. Walter then suggested bringing on an architect for details and permit drawings. But as the couple soon discovered, a lot more creativity and planning would transform the house into something extraordinary.
THE CHALLENGE
Sarah and Tim had visited our renovated farmhouse and felt in sync with my design approach. I fell in love with their house, with its striking proportions, tall windows, and classical details. But wait –- only a couple of original columns left in what was once a sleeping porch? The "good bones" were hidden in a bad '80s renovation. The quick sketch just followed along.
The master bedroom and sleeping porch, designed to run from front to back with a central fireplace, had been subdivided with a large closet and bath intruding into the rooms. It hurt my eyes to see the odd windows and clunky shapes hide the home’s original glory. 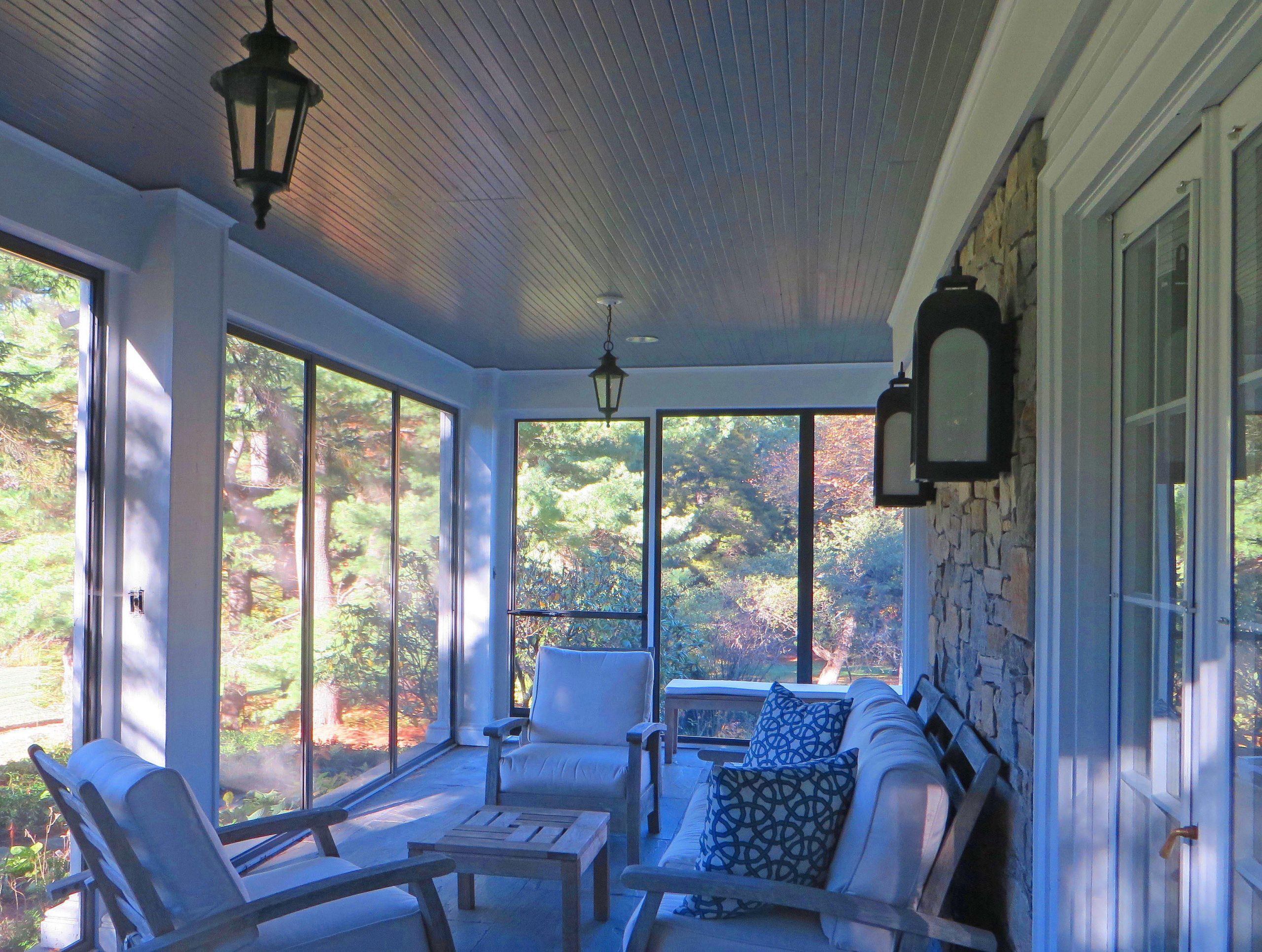 THE MAGIC
To put the symmetry back into those rooms, I proposed rearranging spaces in a way no one had considered. The guest room and their son’s room could share a bath instead of needing two. Why not take over a small sitting room and the son’s ensuite bath, that needed updating, for a new master dressing area and bath? Then the master bedroom could regain its original proportions and the full sleeping porch could transform into an elegant, enchanting library.
Downstairs, I suggested bringing back an outdoor porch that had been turned into a sunroom, now dated and leaking energy. So overall the plan curiously freed up space while it reduced the actual area of the house.

It worked. “We were delighted with Julia’s concept,” Tim remembers. “It inspired us to generate some exciting ideas, like opening up the library ceiling to create a loft.”
CONTRASTING DETAILS
Sarah and Tim love modern detailing and have wonderful, unique taste. We let history re-emerge from under the ‘80s drywall and complimented it with contemporary elements. Essex Restoration were masters at matching the historic details and “got it” when it came to streamlined modernism.
Above the sleeping porch/library we carved out a loft with a metal railing outside their two daughters’ third floor bedrooms. Two-story bookshelves connect the spaces with a contemporary openness.
In the new dressing area and bath, a long vanity along the bright window wall, an oval tub, and a minimal glass shower enclosure contribute to a streamlined aesthetic against the historic backdrop. When guests visit, a door from the son’s room into the master bath allows the family to give the guests exclusive use of the shared bath. 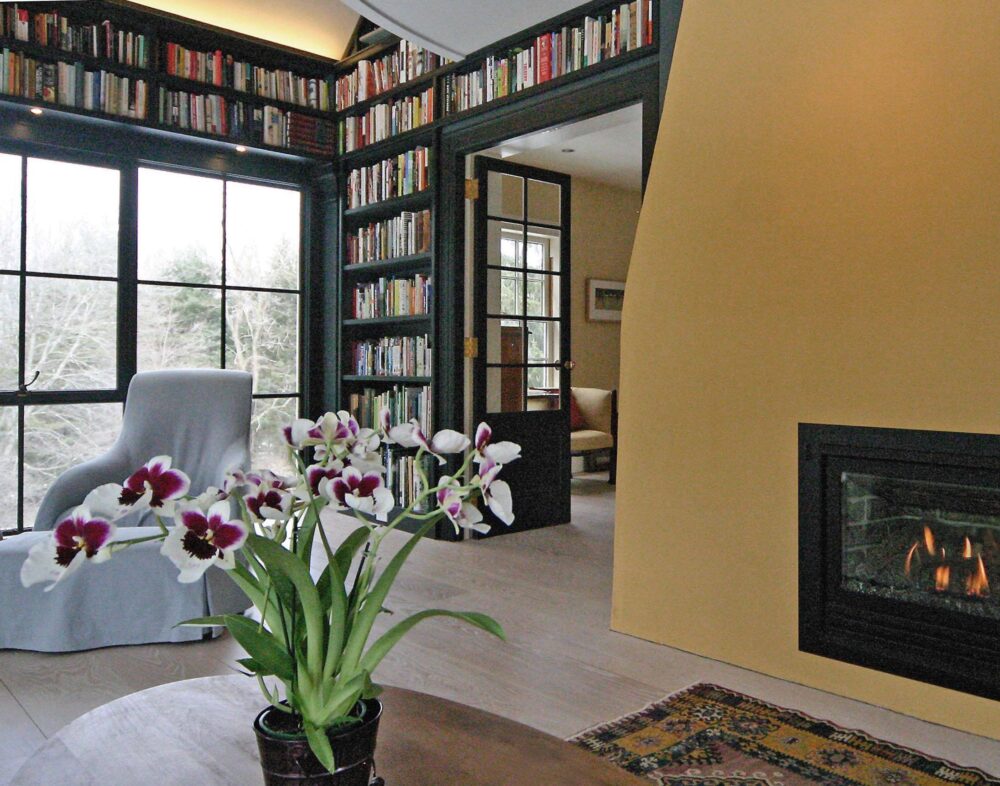 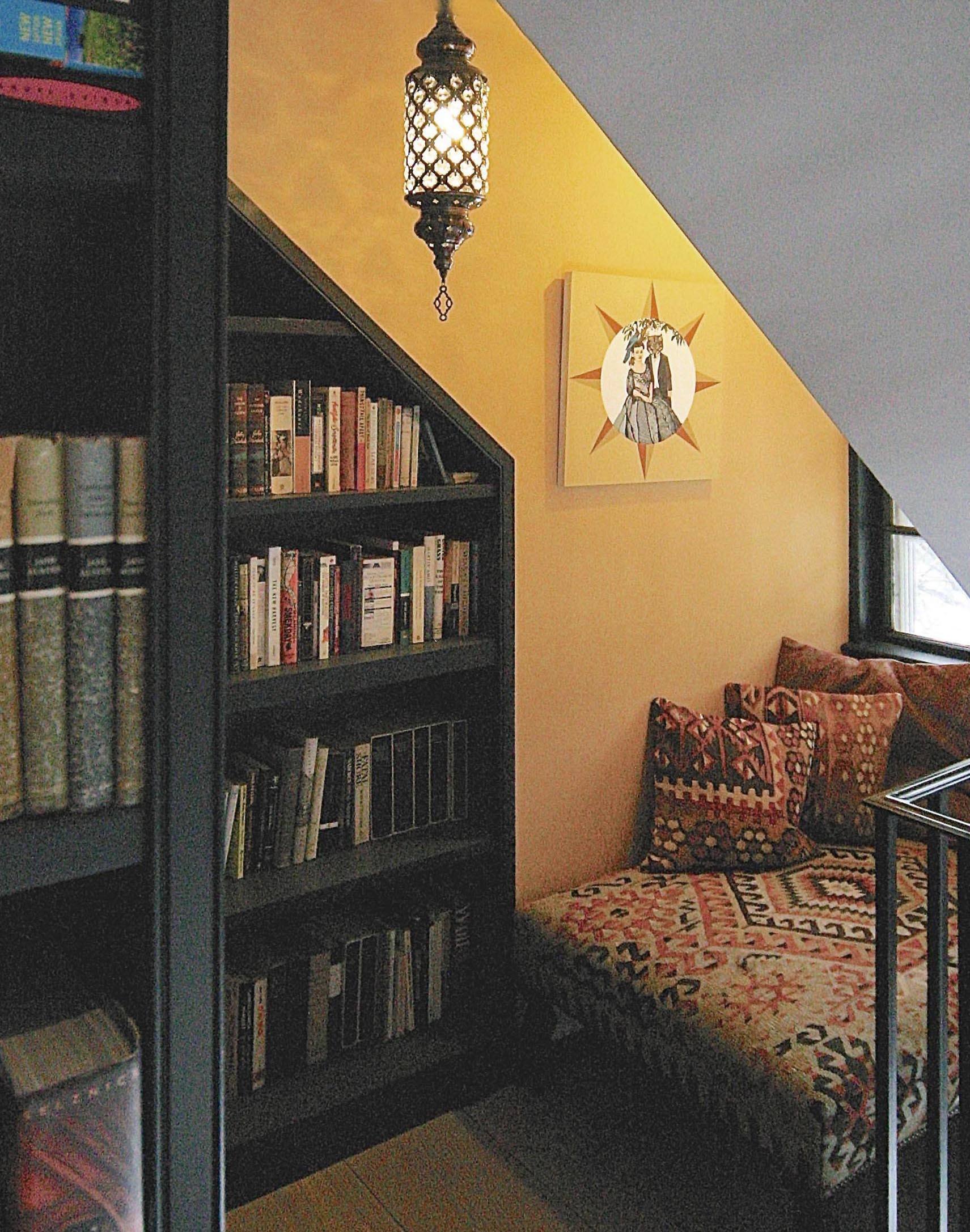 THE REWARD
A project worth doing is worth involving an architect. Why?
Because the plan will be better than you could have imagined, almost every time. And because a magical synergy happens with a good plan, knowledgable and receptive clients, and a skillful, flexible contractor. We become “more than the sum of the parts.”
“We got improvements we didn’t initially see,” Tim explains when he describes the final result, “utility and beauty we didn’t know were possible.”

I get excited when I think about how architecture evolves. Fine art has had a large influence on building design. As a painter, I love to see the connections.
Abstract art has been prevalent in modern art since the early 1900s, yet its origins can be traced back to geometric and linear forms in ancient calligraphy and decoration.  20th Century abstract artists were inspired by the Expressionists, who created colorful distortions and exaggerations, Impressionists, who portrayed a moment’s shifting light and color, and Romantics, who emphasized the senses and emotions. As these and other themes were absorbed, they helped form Post-Impressionism, Cubism, Abstract-Expressionism, and other movements.
In the early 1900s, architects began to apply theories of abstract art to their designs. This fusion of art and architecture led architects to value the “gesamtkunstwerk,” a German word for a total, or well-rounded, work of art. Drawings, diagrams, and models of design concepts were often more important than constructed products. Architects strove for a cohesive building design that included furniture and decoration. 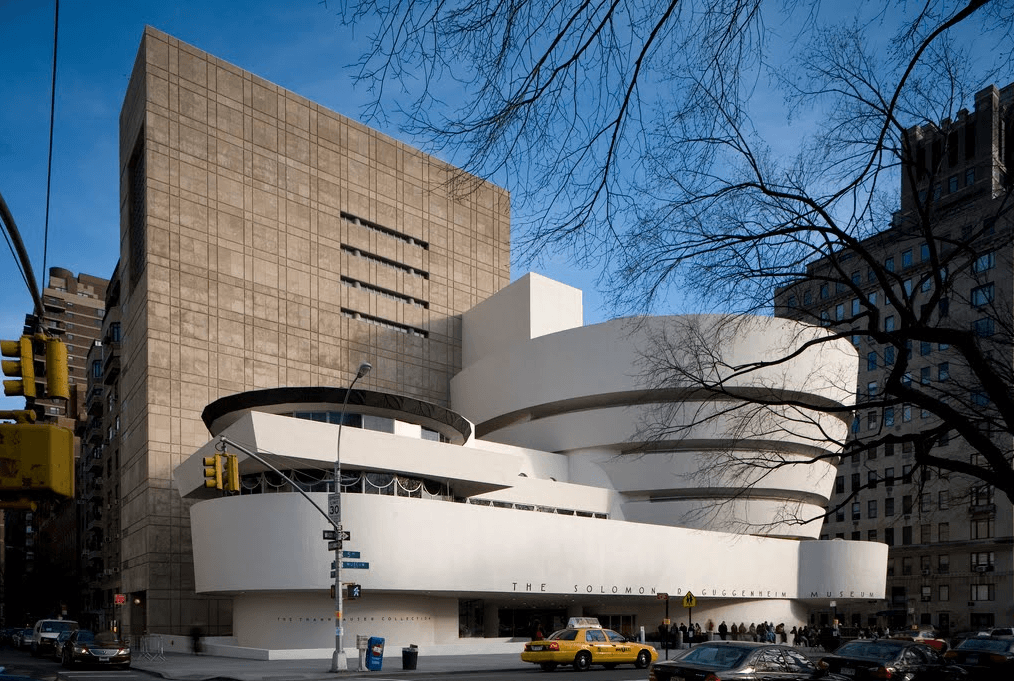 Frank Lloyd Wright followed these values. His houses are known for his insistence on a dominant theme, designed down to the last chair. Even more famously, his New York Guggenheim museum is a masterpiece of the modernist “form follows function” mantra in its purest form. The spiraling circulation path is sublimely expressed on the exterior, with nothing that distracts from its shape.
Frank Gehry adds a mind-boggling, complex layer to the functional plan. He distorts and fragments shapes that are metaphors for objects that inspire him, such as sails, folds in fabric, and musical instruments. He has been influenced by artists as different as Italian Renaissance sculptor Bernini and modern sculptor Robert Rauschenberg. Strong emotions are stirred when you interact with Gehry’s buildings. 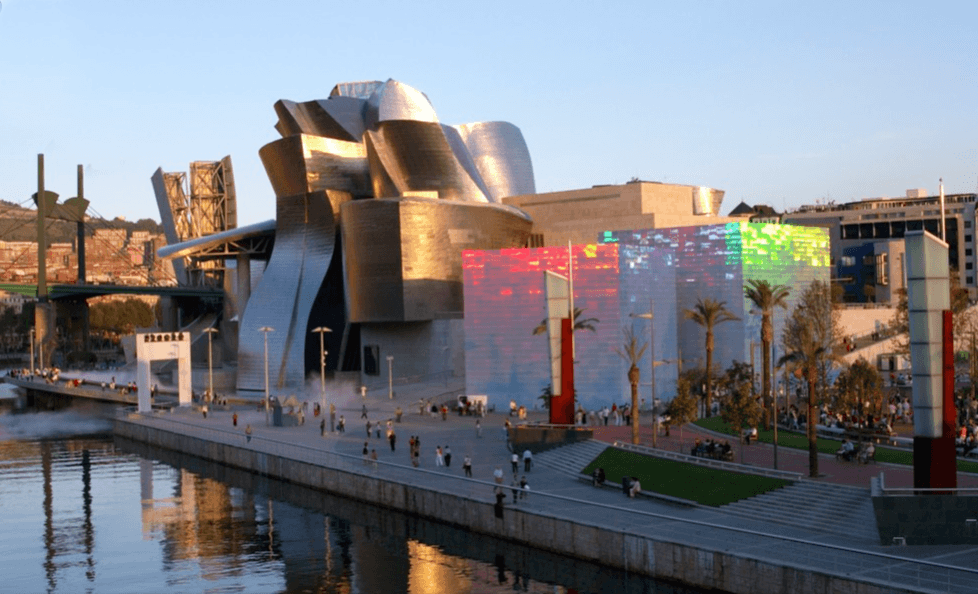 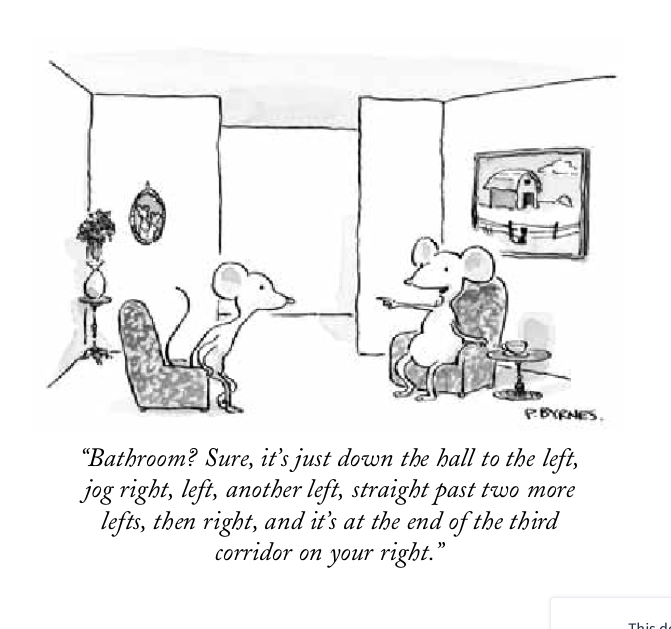