What are the Most Important Qualities Your Architect Must Have?

Even experienced project owners wonder sometimes, what should I look for in an architect? Is it reputation, talent, portfolio? Or simply that I like their work?
There are really only two essential qualities that your architect must have: integrity - both professional and personal - and creative skill. If an architect has integrity, they will always have your best interests at heart and will never put their own desires above yours. But integrity means nothing if the architect doesn’t have the creative skills to make your dreams come to life.
A well-crafted website can be seductive, and a presentation by a persuasive architect can be misleading. So how to tell if your architect possesses the qualities you need? Tell them what makes your organization (or personal life if this is your home) special, what your goals are and what ideas are important to you. See if they are really listening to what you are saying and not simply nodding while thinking “Oh, I've done that before, and I know exactly what they need.”
An architect with integrity will listen to you and respect who you are. And the creative architect will not just hear what you say, but understand what you mean and, in the end, design an exceptional solution, well beyond what you might have imagined.

Why A Great Teacher's Legacy Matters

Recently Metropolis Magazine interviewed me about working with architect Charles Moore, one of America’s most influential architects, on the Dartmouth Hood Museum. Reflecting on my time with Charles in grad school and as his colleague brought an overwhelming sense of awe. As a young architect it meant the world to me to work on the Hood at my alma mater, and his influence continues to feed kindred aspirations in my work today.
The Metropolis article examines the controversy over the Hood expansion by Tod Williams and Billie Tsien, whose work I greatly respect. My memories of working with Moore correspond with what journalist Vanessa Quirk wrote so perceptively in the article. https://www.metropolismag.com/architecture/cultural-architecture/hood-museum-renovation-really-as-bad-as-critics-claim/
In 1981, while I was working at Moore’s Connecticut office, British architect James Stirling invited me as a guest critic to his Yale studio final reviews. Short-listed for the Hood, he had assigned the project to his students. This gave me a sneak preview of the challenging site, similar in difficulty to Stirling’s Harvard Fogg Art Museum addition, my class’ assignment two years before. Like our project for the Fogg, none of the students pulled off a very convincing solution! However Charles was enthusiastic about this difficult sliver of land between Wallace Harrison’s Hopkins Center, a modern precursor to his notable Lincoln Center, and Wilson Hall, an 1885 Romanesque library turned museum. Although the architecture of the Hop was the antithesis of his own work, he valued his friendship with “Wally,” as he fondly called Harrison. He respected the styles of both buildings and joined them brilliantly with his harmonious design.
“Moore’s genius lay…in creating complex architectural journeys…He was of course interested in drawing references to history and pop culture, but for him, sensitivity to place and context—to landscape, as well as the surrounding built environment—was key.
“ ‘Receptivity,’ Moore wrote in 1985, ‘is at the heart of our beliefs as architects.’…Moore ought to be remembered first and foremost as a pioneer of socially responsible, participatory design. It was Moore who, as dean of the Yale School of Architecture, cofounded the Yale Building Project in 1967. Stephen Harby, a faculty member at Yale and a former colleague, suggests that Moore’s refinement of the participatory process, which put users on a level playing field with ‘expert’ architects, is ‘one of his important contributions to architecture.’ All of these aspects of Moore’s process come together, rather ingeniously, in the Hood Museum.” (Vanessa Quirk, Metropolis Magazine)
During workshops with the large building committee that included top administrators, I was in awe of Charles’ genius when it came to thinking on his feet, responding to ideas around him yet maintaining a sense of integrity about his design. Far from precious with his own ideas, with a new suggestion he might tear off a piece of our model and replace it in a different way, saying, “You mean this?”
The administration wanted to make the arts, especially the museum collection, more inviting and accessible to students’ daily lives. The design resulted in a series of bridges and corridors defining enclosed spaces, presenting a tangible metaphor for that goal of connectivity. It “creates this wonderful sequence of invitation, of discovery unfolding. [It’s] a choreography of experience that works all the way from the outside through the courtyard and inside the building.” (Buzz Yudel, for Metropolis Magazine)
The Moore-inspired hands-on teaching at Yale was an exceptional foundation. The First Year Project’s construction experience helped me break through barriers when many 1980 employers hesitated to send a young woman to the construction site. The school prides itself on its pluralism – a dynamic spectrum of approaches that parallels Moore’s sense of inclusivity. Cesar Pelli, whose genius was polar opposite to Moore’s, commented on my solution for the gargantuan British Library in MJ Long’s studio, “Your idea is good, but you need to clean up the garbage.” I can still see the broad grin he would always break into after cutting to the chase.
While that streamlined Pelli approach remains central to my design process, I related most to Moore’s gentle sensibilities. In his housing and urban design studio he questioned why the exuberant rooftop gardens in my sketches had somehow become “lone pines” in the final drawings, This still reminds me not to over-refine a design or a painting. Happiest memories are the field trips Charles loved, to Charleston, Savannah, Boston, New York and Providence, experiencing the best of American urban design and architecture. I’ve continued this enthusiasm for experiential design when I teach architecture. Google Earth images can’t replace exploring surroundings and historic precedent on foot. For an informed and sensitive design response, it’s essential to recognize the qualities of a place at a visceral level,
Charles Moore’s prolific writing, teaching and design continue to inspire my work: in humanistic scale, relaxed sequences of experiential spaces, and love for historic urbanism and inclusiveness. It’s there in receptivity to each person who will be affected by a design, and in the joy I find in working out a solution within the constraints of urban design, renovation, and historic preservation. This kind of legacy plays a crucial role in improving our world.  -Julia Miner

London’s St Paul's Cathedral was designed in the English Baroque style by the renowned renaissance architect, Sir Christopher Wren. Sitting at the top of Ludgate Hill, the highest point in the City of London, its dome is one of the world's largest, measuring nearly 112 meters (over 30 stories) high. 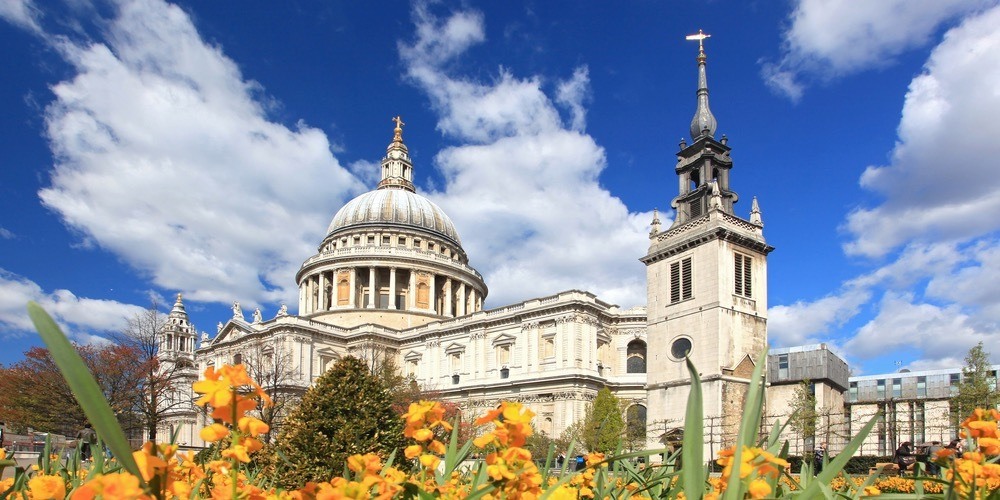 The original church on the site was founded in 604 AD. Wren’s work on the present English Baroque church began in 1668 as part of a major rebuilding program after the 1666 Great Fire. Wren was responsible for the design of 52 churches after the fire. The designs for the cathedral took a decade to complete and 40 years to build. 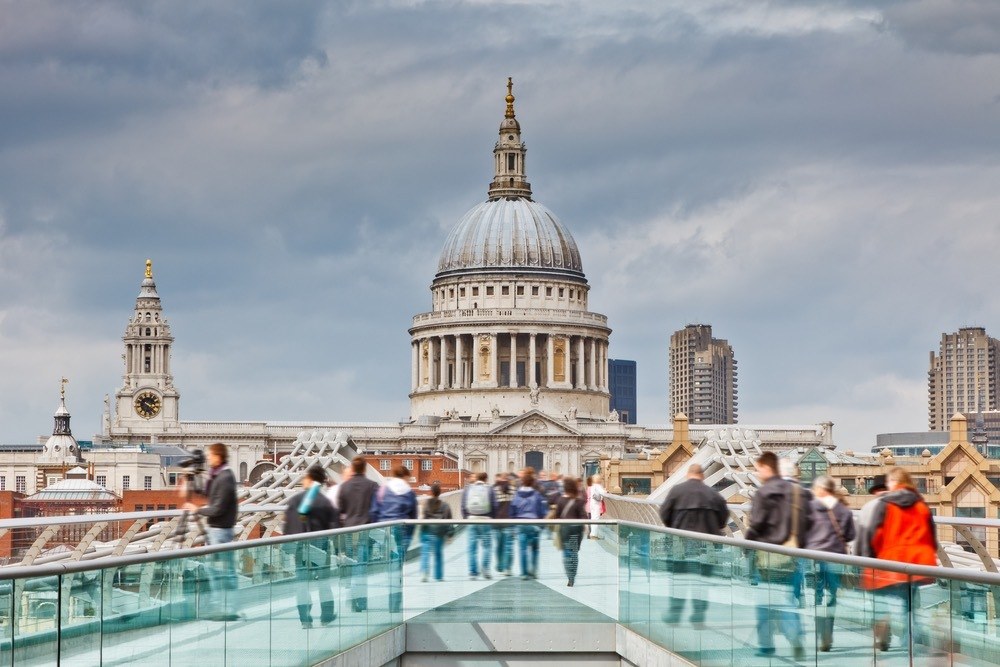 St Paul's has played an integral part of London life ever since - as a dominant element in the city's skyline, as a centre for tourism and religious worship, and most recently as a focal point for anti-establishment protests. 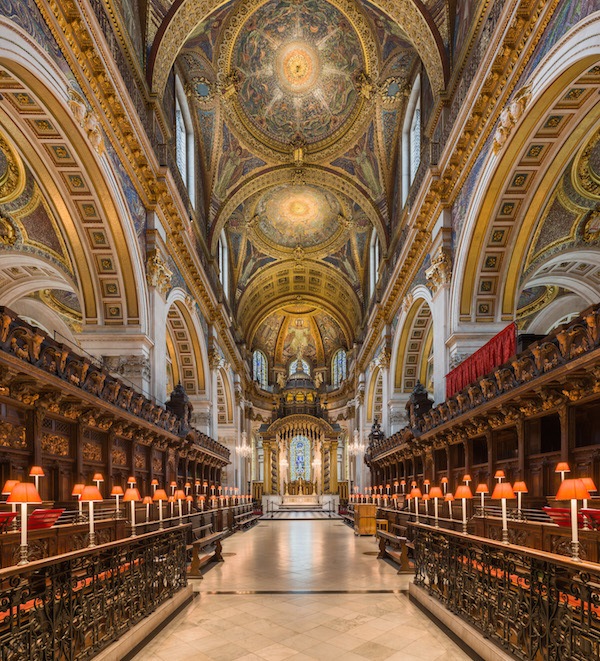 “Everything should be made as simple as possible, but not simpler.” - Albert Einstein 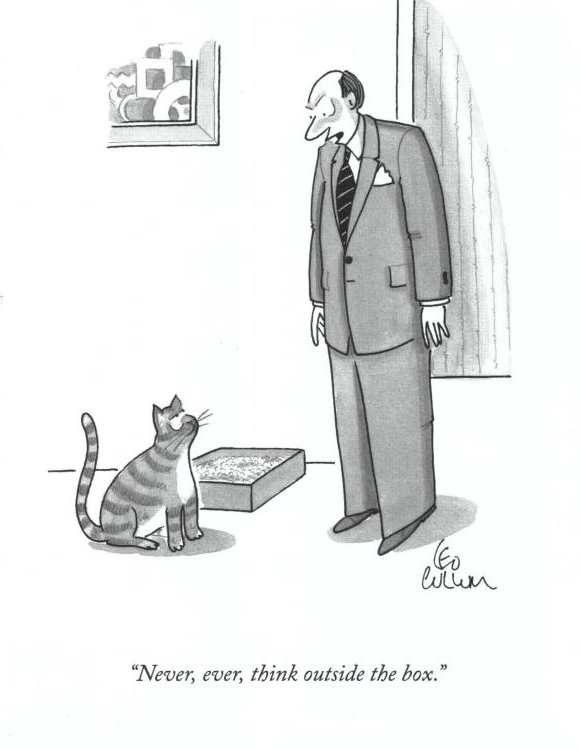